On December 4, 2022, “Pod” members, Kriss and Heather were guests on Toki TV discussing the Port Townsend City Council recognizing the inherent rights of the Southern Resident Orcas, and the need to breach the four lower Snake River dams IMMEDIATELY.

For more information about our work, please watch this recording of a Roundtable discussion on the rights of Nature that took place on November 21, 2021 with expert panelists including Michelle Bender, Lindsey Schromen-Wawrin, Jennifer Calkins and Elizabeth Dunne.

For those who weren’t able to join us for the screening of Dammed to Extinction in April, you have another chance to view it via zoom and listen to our wonderful panelists of experts.

Please register here and submit any questions you’d like the panelists to discuss. Thank you!

Panelists  include the following

Anthony Jones is an Idaho native, and attended graduate school at the University of Washington where he received his MA in Economics. Mr. Jones maintains Rocky Mountain Econometrics, an economic consulting company that specializes in environmental issues with particular emphasis on energy and the impact of hydroelectric dams on salmon and the environment.

Scott Levy is an activist and volunteer. filmmaker, adventurist and outdoor enthusiast. He has a BS in Mechanical Engineering from UC Berkley. Scott has dedicated the last 23 years of his life to studying the effects of the lower Snake River dams on our environment and the consequent climate change effects. Mitigation for their removal is easy. Repairing a collapsing ecosystem is not.

Jim Waddell is a civil engineer with a 35-year career in the US Army Corps of Engineers. He held the highest civilian position in the Corps Walla Walla District as Deputy District Engineer for Program Management and oversaw seven major hydro dams including the Lower Snake River dams. He is founder and director of Dam Sense. He was the Senior Policy Analyst for the Environment in the White House Office of Science and Technology Policy. Jim also serves in an elected position as a Public Utility Commissioner in Clallam County Washington.

Steven Hawley is a journalist from Hood River, Oregon. He’s the author of Recovering a Lost River and the writer and co-producer of “Dammed to Extinction”.

Heather Nicholson is an electric cooperative co-owner in the San Juan Islands. She is engaged civically and with other advocates on the solvability of breaching the lower Snake dams which is the most significant and required action to stop the extinction of critically endangered Southern Resident Orcas and their wild Chinook salmon food source. 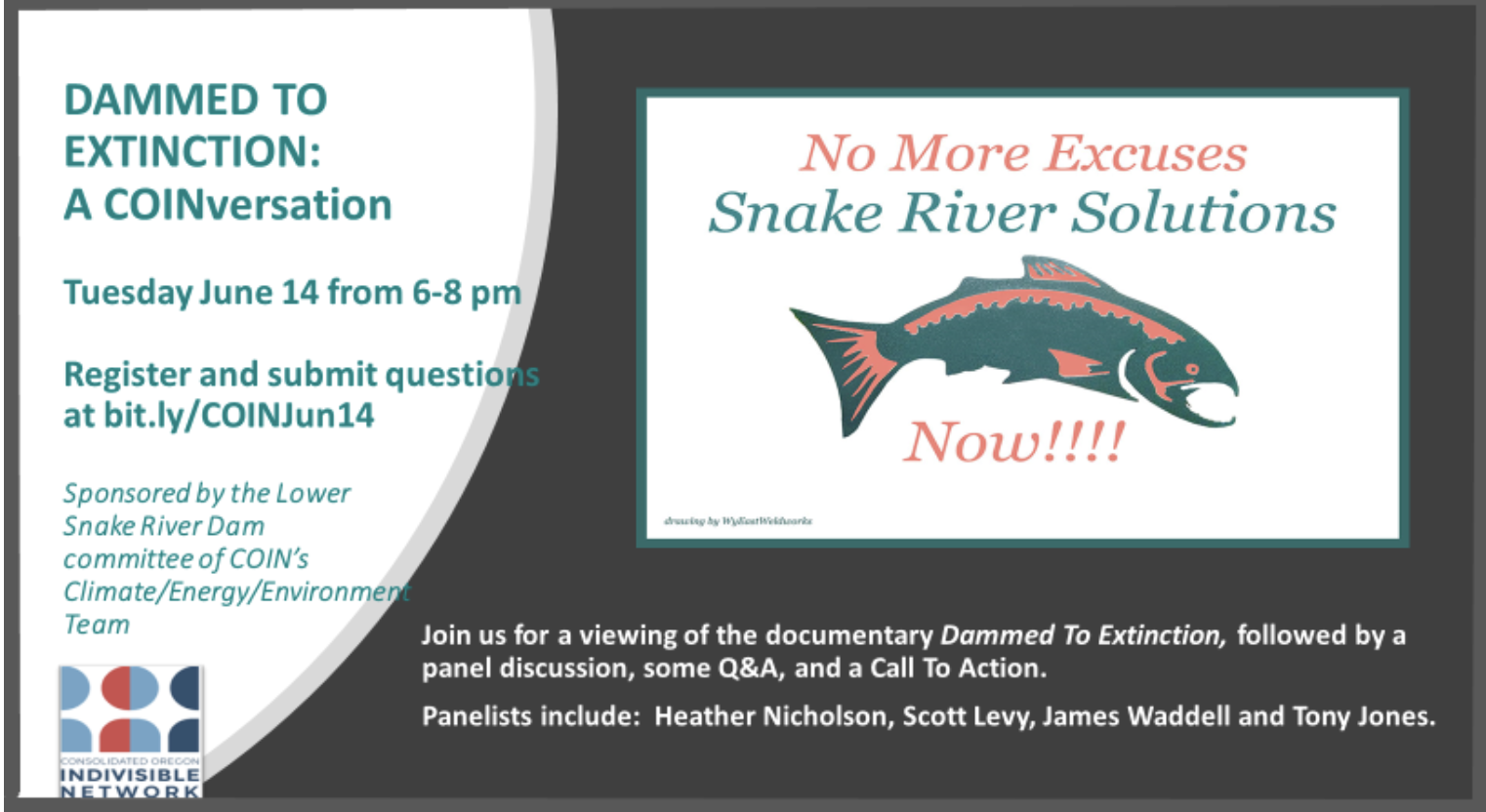 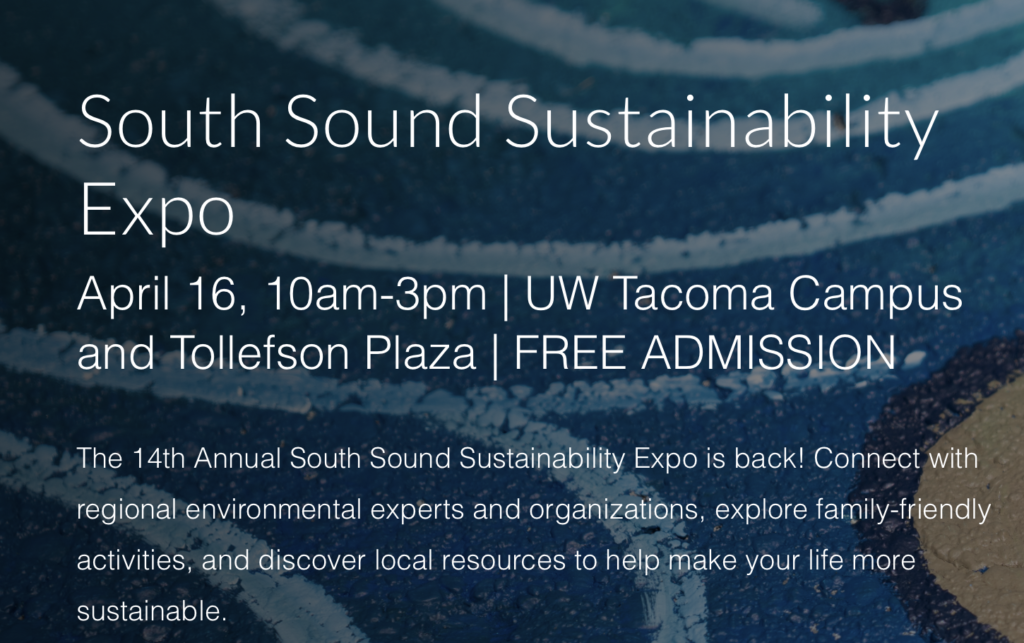 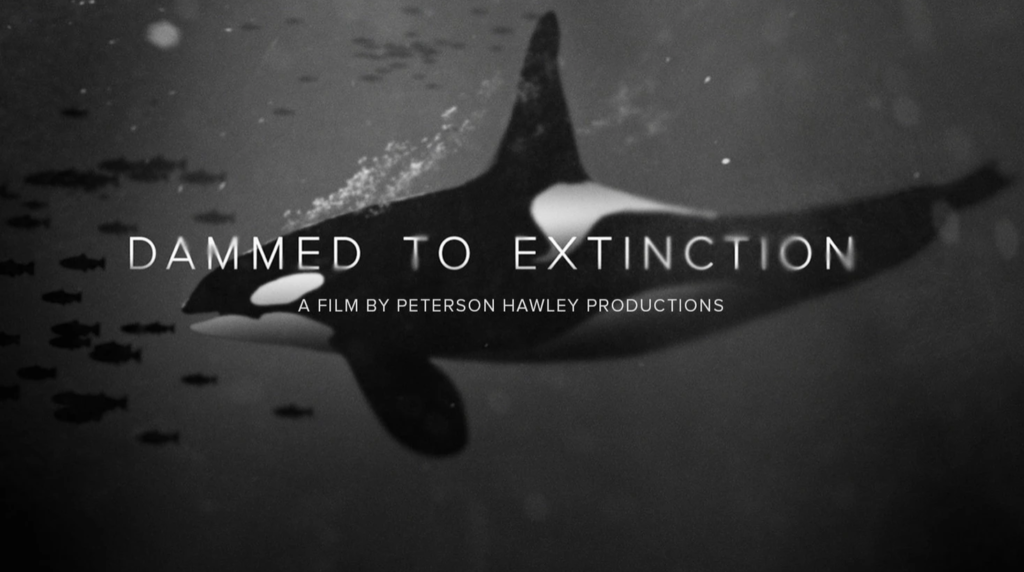 Please join Meaningful Movies Bellevue for an ONLINE screening of the 2019 documentary film Dammed to Extinction, followed by four amazing guest speakers who will address issues raised in the film. Get this must-see event on your calendar now! Dammed to Extinction features orca whale researcher Ken Balcomb, who has studied the Puget Sound Southern Resident Orca for over 40 years. Struggling to survive, the orcas rely on Chinook salmon for their existence. Yet salmon are close to extinction themselves because of a series of four dams on what was once the largest Chinook producing river on earth.

A broad and growing coalition of scientists, economists, conservationists, and citizens say removing these Lower Snake River fish killing dams is the best chance we have to bring abundant runs of salmon and the orca that rely on them. 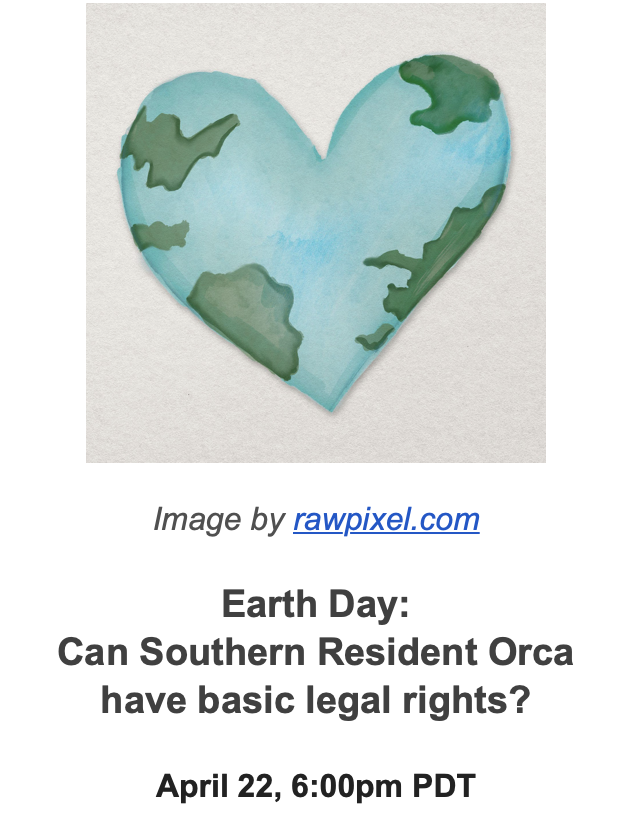 Snake River Savers is excited to have Dr. Kriss Kevorkian, PhD, MSW and founder of Legal Rights of the Salish Sea, join us on Earth Day. She is working hard with a group of citizens to bring legal rights of Nature to the Southern Resident Orcas including the Salish Sea to protect her inhabitants and ecosystems. Join us this Earth Day to learn more about this and how we can help too. REGISTER HERE

LRSS founder, Kriss Kevorkian, and members of Earth Law Center, Michelle Bender and Elizabeth Dunne, will be panelists along with Jennifer Calkins from Western Environmental Law Center and Lindsey Schromen-Wawrin from Shearwater Law for a presentation on Tuesday, April 26th at 1:30 under the Ethics and Southern Resident Killer Whales Recovery 2.